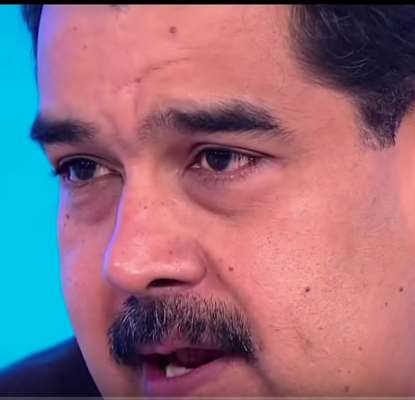 The U.S. government has a long history of manipulating drug trafficking charges to advance geopolitical agenda. From 1975 to the late 1980s, Panamanian dictator Manuel Noriega was on the CIA payroll. U.S. intelligence knew that Noriega permitted the Colombian cartels to ship cocaine through his country in return for huge cash payments. His drug activities were tolerated because he helped the CIA monitor leftist movements and other drug traffickers.

Then Noriega crossed the first Bush administration, and the U.S. invaded Panama. The justification: Noriega was a drug trafficker. The fact that the CIA had long known about and tolerated Noriega’s drug trafficking because he supported U.S. policy is beyond dispute.

The CIA’s collaboration with drug traffickers in the 1980s is a matter of public record, acknowledged by CIA Inspector General himself.

Secretary of State Mike Pompeo singles out Venezuela because Washington policymakers (and some Democrats) want to impose “regime change” on Venezuela. Drug trafficking charges make it harder for anyone Congress or the press to object to this policy. These charges will not deter drug trafficking in Venezuela. They will deter debate on Venezuela in Washington.

In the case of Maduro, however, the charges are more legend than fact, as the Washington Office on Latin America (WOLA) reports.

Perhaps the most sensational aspect of the indictments is that one of them names Nicolás Maduro as the leader of a drug trafficking organization called the “Cartel of the Suns.” Journalists specializing in organized crime have for years called into question the existence of such an organization. In 2015, when it was Diosdado Cabello who was said to be the head of this cartel, Javier Mayorca, who has carefully researched the issue, said, “I doubt the existence of a Cartel of the Suns.” The term, he suggested has become “a sort of urban legend developing in Venezuela, which, over time, has been used to describe varying actors.”

As Insight Crime has suggested, “The drug trafficking structures in the Venezuelan state are not a cartel, they are a series of often competing networks buried deep within the Chavista regime, with ties going back almost two decades.“

While there is little doubt drug trafficking runs through the Maduro regime, the metaphor “Cartel of the Suns” overestimates its coherence and its articulation with Maduro himself. It is a dubious strategy that effectively provides a unitary name to a complex set of phenomena and helps portray it as a serious threat to U.S. security.

And then there’s this fact.

Venezuela remains a relatively minor player in the transnational drug trade. As WOLA has noted in a recent report, Venezuela is not a major transit country for drugs bound for the United States.

WOLA is left-liberal think tank in Washington with a track record of reliable reporting. While the Trump administration (and some sectors of the Democratic party) support “regime change” in Venezuela, WOLA is working for a negotiated settlement. 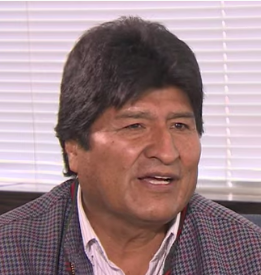 Season 2 of the adventures of Tom Clancy’s CIA man has arrived and the target is “Venezuela,” a mythical Latin American country where Americans like Elliot Abrams and Mike Pompeo like to project feelings of aggression and domination. The show intends to entertain and to inculcate Americas in the false narrative that Venezuela is some kind of threat. You could call it “regime change propaganda,” or you could call it utter bullsh*t, depending on your vocabulary.

Venezuela, the real country of 30 million people, is in the throes of a deep social crisis. It is a country that needs a peaceful negotiated settlement of its profound political differences. The opposition, led by novice Juan Guaido, has a solid base of public support. So does the government of President Nicholas Maduro. Norway has been facilitating negotiations and the Washington press corps has studiously avoided covering the talks.

It is true that the Venezuelan government and its intelligence agency, SEBIN, have a poor record on human rights and torture. The CIA also has a poor record on torture, as shown in new movie, The Report. And Jack Ryan is no anti-torture crusader. He’s a fantasy generated by an empire in decay.

Ever since Venezuela’s pro-American uprising “fizzled on April 29, the Trump White House has faced a choice about Venezuela: negotiations or “regime change.”

A negotiated settlement and peaceful transition is the goal of the talks sponsored by the government of Norway. Representatives of President Nicholas Maduro’s government and the U.S.-backed opposition lead by Juan Guaido have attended the talks. But when the U.S. government announced a new round of sanctions, the Maduro government pulled out. Now Norway is trying to get the talks started again.

Meanwhile, the Trump administration continues on the “regime change” track, seeking to split Maduro’s government by negotiating with one of his top allies, Diosdado Cabello.

The administration tried this approach with Manuel Figuera, head of the country’s intelligence service, SEBIN. Figuera defected to the United States but Maduro didn’t fall.

Now the U.S. is meeting with Cabello with the same intention, according to the Associated Press.

Cabello has long been seen as a rival to Maduro, someone who has more pragmatic economic views and is less ideologically aligned with communist Cuba. He sat to the right of Hugo Chávez when the late socialist designated Maduro, to his left, to be his successor in his last public appearance before dying of cancer in 2013.By all accounts Cabello was not among the high-placed officials who were in on a plot to remove Maduro in April, when Guaidó and his mentor Leopoldo López appeared on a bridge in eastern Caracas surrounded by a small contingent of armed troops. Since the uprising’s failure, the retired army lieutenant has seen his influence in the government and security forces expand, with the appointment of close allies to head the army and the feared SEBIN intelligence police.” 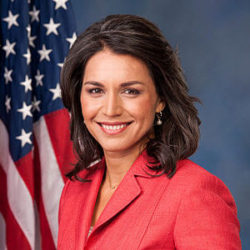 When it comes to issues of war and peace, no 2020 Democratic presidential campaign is more impassioned or articulate than Rep. Tulsi Gabbard of Hawaii.

To be sure, other 2020 Democrats are beginning to speak out on war and peace issues. Elizabeth Warren seeks the mantle of JFK, the insider as reformer. Bernie Sanders puts a socialist spin on Republican Dwight Eisenhower who warned about the military-industrial complex. Beto O’Rourke called Israeli prime minister Benjamin Netanyahu a “racist.” Pete Buttigieg has stood up for Israel . Kirsten Gillibrand is well-spoken in Mandarin.

Gabbard tops them all, at least in passion and detail. From Iran to Venezuela, the Iraq war veteran is speaking out against Trump’s foreign policy and its policies of “regime change,” that is, the U.S. policy of seeking to overthrow foreign governments that it does not like.

Gabbard served as a medic in the aftermath of the disastrous “regime change” war in Iraq. As commander in chief, she would not fight another one.

In her tweets, Gabbard uses her critique of “regime change” policies to bolster and explain her positions on domestic issues like energy, immigration, and infrastructure. Ending regime change wars, she says, will yield “a peace dividend.”

No candidate has said more about Venezuela than Gabbard.

She calls Trump/Bolton intervention in Venezuela intervention a bid to control oil. “Regime change,” she says, is corrupt.

“Regime change” wars, she goes on, are wasteful.

She does not spare fellow Democrats, like Joe Biden, who have supported wars of choice in the 21st century.

She links U.S. military intervention in Central America in the 1980s to the flow of immigrants fleeing those countries today.